The book too hot for Amazon! The Brazen Altar, book one of the Passionate Pantheon, takes us to The City. In this place of peace and plenty, without disease, suffering, or want, people find meaning through service to their gods. These they know were created by humans, but as they protect and provide for the people, why wouldn’t the people express their thanks through utter devotion? In a Utopian society, what better way to express this love than through pleasure and faith? Banned on Amazon for sexual content! 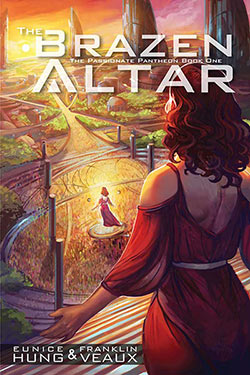 For Kheema and her seven fellow Potentials, it means entering the temple of the Sun God to undergo months of training and practice to determine which of them will be chosen as Sacrifice. On the day of the summer Solstice, the chosen one must recite the entire litany from atop the temple, while submitting to constant forced orgasms from dawn ’til dusk.

For Terlyn, service means becoming part of the Garden, bound naked and asleep while worshippers help themselves to her body. Terlyn wakes in ecstasy over and over, only to fall asleep again. The experience changes her and her relationship with her friend and lover Donvin, who visits her while she is part of the Garden.

Ashi’s service to the god known only as ‘The Wild’ entails competing with other worshippers in a forest that appears overnight to demonstrate her resilience and will, so that she might become part of a ritual involving an altar, a long row of cages, and the complete abandonment of her self.

The three stories brush against each other, revealing the racing heart of the City, as the people of the City serve, or ask for enlightenment from, multiple gods at once.

On the morning of the five hundred and forty-second Ceremony of Light, a slender, red-haired woman with gray-green eyes waited impatiently to be sacrificed to the god of the sun.

The square in front of the temple buzzed with people. They’d been arriving throughout the night, alone and in groups. Tiny dronelights flitted through the air, lighting their way into the courtyard. The drones switched off their lights the moment they entered the courtyard, so as not to displease the Sun God on this, the day dedicated to his radiance. Behind the assembled congregation, the dome projected by the shield generators glowed faintly in the pre-dawn air. Ahead, the stepped pyramid of the Temple of Flame, the largest of the great houses of worship, carved an inky void in the sky.

Deep inside the Temple, in a small chamber illuminated by the dim yellow glow of small globes floating in niches in the rough stone walls, Kheema swallowed. She took a deep breath to hide her nervousness. Five hundred and forty-one Sacrifices before her had walked barefoot down the narrow hallway into this room. From here, five hundred and forty-one Sacrifices had ascended to the altar atop the Temple to welcome the day.

Now it was her turn. She could feel the weight of history on her shoulders, as pervasive and tangible as the mass of the temple itself. All but one of the Sacrifices before her had succeeded in the ritual that would bring the blessing of the Fiery One to his people. She didn’t want to go down in history as the second person to fail.

“You’ll do fine,” Janaie said. She slipped her hand into Kheema’s.

Kheema managed a small smile. “Is it that obvious?”

“I can’t hide anything from you.”

“Would you want to?” Janaie placed a gentle kiss on her shoulder. “Your agony will be so lovely. I know the Sun God will be pleased.”

Kheema looked down at her feet, pale against warm dark stone. She thought, not for the first time, that it felt like a living thing, this massive edifice of stone, the physical embodiment of the Lord of Light.

She remembered being surprised by the warmth the first time she’d touched these walls, eighteen months ago to the day. She and seven other Potentials had walked through the door on the far side of the courtyard, a door that opened just once a year to admit eight people who would compete to become Sacrifice to the Lord of Light. She’d hung back from the rest of the Potentials, running her fingers over the hard, textured blocks of stone, so carefully fitted that not even the finest knife blade could slip between them. The stones felt warm, much warmer than she had expected. The warmth entranced her. Tingling currents raced along her skin.

She could feel his presence here. She could taste him, the God of the Sun, in the air around her. Her skin buzzed. A soft whisper filled her mind. In that instant, she knew it would be her. The knowledge filled her until she felt she might burst. Of the eight women in the tight group who had passed through the mammoth stone doors into the Temple, she would be the next Sacrifice. She smiled at the thought.

“Hey!” The voice came from another Potential to Kheema’s left. “Hey, that’s her!”

“What?” Kheema looked around.

“That’s her!” The voice came from a slight woman just a little ahead of Kheema. She stood half a head shorter than Kheema, with wide, dark eyes and dark hair that fell in a series of curls and ringlets over her shoulders. She pointed to the priestess who had met them at the door, and who was now leading them along the gently sloping hallway into the depths of the Temple. “That’s her! Fahren! She was the Sacrifice two solstices ago. I was here. I remember. She was so beautiful. She’s the reason I decided to become a Potential. If they choose me, I hope I can suffer as wonderfully as she did. I’m Janaie, by the way.”

“I mean it. If they don’t choose me for the sacrifice, I hope they choose you. I bet you would suffer exquisitely.” Her eyes swept up and down along Kheema’s body. Something feral glittered there, in the soft light of countless small floating glow-globes. “I would love to watch you suffer.”

Kheema turned away, blushing furiously. Her hand caressed the wall. The tingling grew stronger, like a light electric current dancing playfully over her skin. She smiled a small, secret smile.

Praise for The Brazen Altar

In a world where all need is well and truly met, desire becomes the most important currency. Where AIs are gods, Sacrifices are voluntary, and sex is but a lingering smile away, relationships unfold through enthusiastically consensual exploration.

The world, built by Hung and Veaux, asks us to imagine who we are without fear of scarcity. Would we be artists, knowledge seekers, decadent servants? Or would we retreat into our own thoughts and imaginations, giving ourselves time to actually understand our innermost ambitions?

The Brazen Altar is a gratifying example of what could happen if we allow technology to heal our deepest wounds, and shift our focus to more carnal aspirations. Kink happens, and it happens to be the main event, as we witness society delve into the realm of extreme pleasure in service to their deities.

One of the biggest problems with fantasy and SciFi stories is that rarely are the consequences of the fantastical elements taken to their logical conclusions. Magic and technology serve as throwaways to drive the plot and are then forgotten about. As a result, I hold in high regard stories that add a fantastical element and then explore the implications such technology would have.

The Brazen Alter nails this aspect of the story and it was my overriding feeling throughout reading it. In a post scarcity world, where would humanity find their drive? We've seen how religion and tribalism shape our society today, but what would it look like in a world where the desperate need for survival and power were taken away as concerns completely?

Tags for The Brazen Altar

Buy direct from the publisher in Kindle, ePub, or signed paperback!