The gods provide for the people. The people worship the gods through rituals of sex and connection. 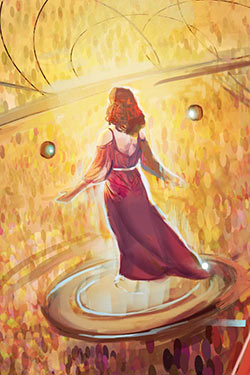 Come with us to the City, an idyllic, Utopian post-scarcity society where anything you want or can imagine can be called forth from a Provider, a device that manufactures whatever you desire from its component atoms.

As a citizen, you worship one (or more!) of many gods, each with different rites of sex and connection.

Most gods require regular Sacrifice in which people compete for the honor of undergoing a gruelling, and public, sexual experience as a token of their devotion and service.

The physical work of maintaining the City is carried out by drones, which fly about discreetly keeping things in order and serving the people’s needs. Physical violence is almost unheard of, and should it ever occur, the drones are quick to intervene.

Medical pods can modify bodies in almost any way imaginable, heal everything from a skinned knee to a shattered spine, and extend life almost indefinitely. Oh yes, people in the City live a long time. You probably won’t choose your adult name until you’re 40 or 45, and you stop aging at about 25. Any harm that doesn’t kill you on the spot can be fixed. Any change you want to make can happen by spending an afternoon in a pod.

Each of the many Cities has its own character, flavor, and set of religions. Each City has a central religion and a number of other religions. The City’s central religion helps set the theme for City society and civic life. The City of The Brazen Altar revolves around the Sun God, a god of knowledge, values knowledge, information, and history.

The Cities are circular, and house two, three or four million people who live in tall curving black towers along the outer rim. Each City is protected by a great shield dome within which the environment and weather can be controlled no matter what it’s like outside. Beyond the shield? Who knows? The Wastelands; nobody goes there. Who would want to live without Providers?

At the heart of the city lies the Temple District, and the Temple of the City’s dominant religion sits at the exact center. Pods zip about on elevated tracks carrying people to and fro.

Physical beauty in all things is a central value of every City. The space between the living towers and the Temple District is dominated by gardens, lakes, small forests, pathways, bubbling streams, rolling hills...all of which can shift and change over time, as even the gods delight in the creative act. What was a lush hill today might be a sparkling pond with people racing small sailboats tomorrow, or a series of gardens or an overgrown forest with waterfalls flowing over large outcroppings of rock next month.

The principle moral and social values of the civilization are consent, autonomy, and beauty. Everything in the City, no matter how mundane, is designed for beauty. Because everything from drones to food to eating utensils are created as needed from a Provider and then recycled after it’s no longer needed, everything is unique. The gods and the people design even the most utilitarian objects for beauty.

Residents of the City are not permitted to infringe on one another’s consent or agency, though they are allowed voluntarily to give up their agency. One person may tell another “For the next week, you can do whatever you like to me,” and the drones will not intervene so long as the second person does not cause permanent harm to the first (which, in a place where medical technology is so advanced, is very difficult to do!). Such voluntary surrender of autonomy may be unlimited or limited in whatever ways the people negotiate, but may only ever be for a finite period of time.

Open display of sexuality is no more a taboo in the City than a pleasant conversation over dinner. It’s no more unusual to find people having sex in a park than it would be to find people there holding hands. Drones keep a watchful eye, making sure that nobody is coerced or compelled into any activity they don’t consent to.

Promises are sacred in the City. Even the gods will not stand in the way of a promise given. Great or small, promises are a bond; if people do not keep their word, society fails.