In Divine Burdens, book two of the Passionate Pantheon (coming Fall 2021), explore a City where things are far from easy. In this metropolis, the gods provide everything that their people could ever want. But such largesse comes as a price, and in a place where there is neither money nor want, the only currency that means anything is your body... 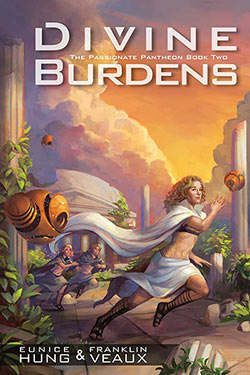 Divine Burdens takes a different path from the first book in the series,  The Brazen Altar. This book explores body horror and non-consent against the backdrop of an idyllic far-future Utopia where the gods have a much different relationship with the people they serve.

Lija trains alongside the City’s best athletes in merciless competition to win the coveted role of sacrifice to the god of the Hunt, pursued for three days and three nights through a forest that bends to the will of the gods. She will be driven to exhaustion and terror, her body offered as a prize to the hunters.

Rajja, an exile, is brought against her will to the temple of the God of the Deep, where she endures impregnation by tentacle, becoming the incubator for the god’s new incarnation. As she is held in the temple, her body forcibly changed to fulfil her new role, she learns that she is far more suited to becoming the Bearer of a god than she might ever have dreamed.

Erianna surrenders herself in service to the mysterious, enigmatic Gleaner, the god that places a part of itself within her. Erianna’s body will be invaded by a sacred parasite whose tendrils spread through her to manufacture the Blessings that others consume for sexual gratification, a process that changes her and inflames sexual desire so great she loses herself in its boundlessness.

The lives of each of these women will be forever altered by their experiences.

She ran through the forest at a steady trot, conserving her strength. The sun hung low and red in the sky. Already, pools of inky black gathered between the trees. Soon it would be nearly impossible to see. There would be no dronelights to guide her, just the feeble glow of the two moons to light her way. The darkness was a double-edged sword: it would hide her from her pursuers, but it would also force her to move more slowly.

She caught the thin white robe that floated behind her with a practiced motion. The robe, made of a nearly indestructible fabric so light it was almost weightless, had a habit of snagging on bushes whenever she stopped paying attention to it.

She scanned for escape routes. She had made a bad turn some ways back, and now found herself in a dense part of the forest with no obvious path. If she couldn’t find a way through, she would be forced to turn back toward her pursuers, who were no doubt already gaining ground on her.

Her muscular body spoke of ceaseless dedication to training. Her skin, glossy with sweat, was covered with scratches. She had a bruise on one knee where she’d fallen against a rock.

She wore a harness of thin straps that both supported and exposed her compact breasts, which she’d had firmed up and reduced in size to make running easier. She also wore a short skirt of a white pleated material so shiny it almost glowed in the deepening gloom, and that damnable robe, always floating out behind her as if searching for things to catch on. Her feet were shod with an elaborate pair of closed-toed sandals, held in place with a bewilderingly complex set of straps. Exactly what she would be wearing on the night of the Hunt, when she would be running through these woods for real, pursued by people with serious intent.

She swerved toward a gap between two trees. She had to turn sideways to squeeze through. The rough bark scratched her skin. It would be different when she made this run for real. She would be panicking, out of her mind with fear. It would be harder to plan ahead. She needed to know the land by instinct before then.

Her hunch played out. The trees thinned on the other side of the gap. She ran faster, sprinting across the relatively open space toward another dense cluster of trees ahead. When she reached it, she held her breath, straining for the sounds of pursuit.

She sighed, grateful for the brief reprieve. Her throat burned, reminding her that she’d had nothing to drink since she’d crossed a small stream half an hour ago.

She heard a crash behind her. Her heart leaped. She headed off again, pushing through a cluster of bramble that rose almost to her knees. Something snagged her foot and sent her tumbling hard to the ground. She scrambled back up and set off once more.

She increased her speed, keeping a pace that would not leave her too winded in case she had to fight. As she ran, she recited the mantra that would help guide her when the madness was upon her.