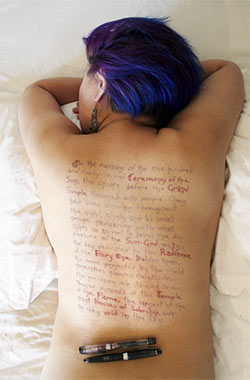 Pre-orders for Divine Burdens are now open! Support the crowdfunding to get the eBook or a signed paperback at a reduced price, plus tons of other fun stuff like a kazoo ball gag (yes, really!). Support the book here!

In 2018, during a vacation in Lincoln, England, they officially broke ground on what would become that Passionate Pantheon series when Franklin write the first paragraph of the first draft of The Brazen Altar with fountain pens on Eunice’s back. And the rest, as they say, is history.

Their first novel together, The Brazen Altar, publishes May 1, 2021. You can download a press release here.