The Hallowed Covenant, book three of the Passionate Pantheon, follows seven friends through the Festival of the Lady, a month-long celebration of art and creativity culminating in the Dance of Sacrifice to the goddess of art. They make choices and set off on new journeys that affect all their lives, forever altering their friendships and relationships. 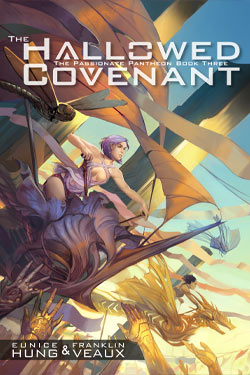 For Kheema and her seven fellow Potentials, it means entering the temple of the Sun God to undergo months of training and practice to determine which of them will be chosen as Sacrifice. On the day of the summer Solstice, the chosen one must recite the entire litany from atop the temple, while submitting to constant forced orgasms from dawn ’til dusk.

For Terlyn, service means becoming part of the Garden, bound naked and asleep while worshippers help themselves to her body. Terlyn wakes in ecstasy over and over, only to fall asleep again. The experience changes her and her relationship with her friend and lover Donvin, who visits her while she is part of the Garden.

Ashi’s service to the god known only as ‘The Wild’ entails competing with other worshippers in a forest that appears overnight to demonstrate her resilience and will, so that she might become part of a ritual involving an altar, a long row of cages, and the complete abandonment of her self.

The three stories brush against each other, revealing the racing heart of the City, as the people of the City serve, or ask for enlightenment from, multiple gods at once.

“If you serve as Confessor,” the High Confessor said, “you will take a Temple name. You will leave your old body and your old name behind, and during your service you will be known only by your Temple name.”

Inann raised her hand. “What is your Temple name?”

“Most of the gods have sacrifices. The High Confessor is the Sacrifice to the Keeper. My term of sacrifice lasts ten years, and for those ten years, I have no name. I take on the gravest of transgressions, hear the confessions of other high priests and priestesses, and endure the harshest rituals of atonement.” She touched the filigreed choker around her neck. “We don’t even have any public symbols of office. I wear this during your training so you can recognize me, but never in the public side of the Confessory. Unlike every other Sacrifice to every other god, when my time as High Confessor is up, nobody will ever know the sacrifice I made. Nobody I serve or serve with will even know my name.”

Silence settled over the garden as the initiates digested what she’d said. Without warning, a small furry chittering bandovan darted from one of the openings in the wall surrounding the garden. It streaked through the group of initiates and bounded onto the High Confessor’s lap, where it looked up at her, front paws folded together. She burst out laughing. The tension shattered. “You will probably make friends with the local critters,” she said. “Sometimes it’s nice to have someone to talk to, isn’t that right?”

The bandovan chittered in agreement, then climbed onto her shoulder and draped itself around her neck. Its long, striped tail hung down nearly to her lap.

“Not all of you will become Confessors, and that’s okay,” she went on. “Of every ten people who volunteer, perhaps three will stay. The Keeper asks a lot of us, perhaps more than any of the other gods. You have earned our gratitude just by being here. If you discover that being a Confessor does not suit you, there is no shame. It is not for everyone, and you can’t know if it’s for you until you’ve started training. You are always free to leave at any time, without judgment.” She looked around the ring of faces. “I can tell you don’t believe me. That's okay. When I sat where you’re sitting, I didn’t believe it either. It’s true. Of the nine people who became initiates with me, only two of us took vows as Confessors. That’s normal. Don’t feel you have to stay from a sense of pride even if you don’t want to be here. It’s far better that a hundred people who might make good Confessors do not take their vows than one person who is poorly suited does.”

Jenniel raised her hand. “What makes someone suited to be a Confessor?”

“Hmm.” She stroked the bandovan. It nuzzled her ear with a wet black nose. “First of all, I think, compassion. You have to want to make the City a better place. We serve a vital function by providing the means for people to atone for transgressions, make things right, and release their guilt. This above all is why we do what we do, to help people come together instead of fly apart. We all hurt others at some point or another. We all collect our share of bumps and bruises on our journey through life. Confessors make other people’s journey a little easier. We smooth over the rough parts in the lives of others. Beyond that…” She shrugged. The bandovan chirped in reproach, then re-settled itself across her shoulders. “An ability to read and empathise with people. Skill at listening. Everyone knows us from grand confession and petite confession, but a lot of what we do is simply listen to people at group meals, or give people private advice. Ability to keep secrets, of course. Introspection. Empathy. Ability to separate ourselves from our egos—that’s a difficult thing, and not many can do it.”

“Is it worth it? All the things you’ve given up. Would you do it again, if you knew then what you know now?”

She thought for a long moment. When she spoke, her voice was heavy and slow. “I don’t know. The person I am now would say yes. I am not now the person I was then. I do not regret what I’ve sacrificed, but I don’t know if I can answer for the person I used to be. I am grateful my life has taken the course it has, but I have given up so much.”

Praise for The Brazen Altar
Tags for The Hallowed Covenant